Hunt For The Decepticons voyager Sea Spray and scout Breacher 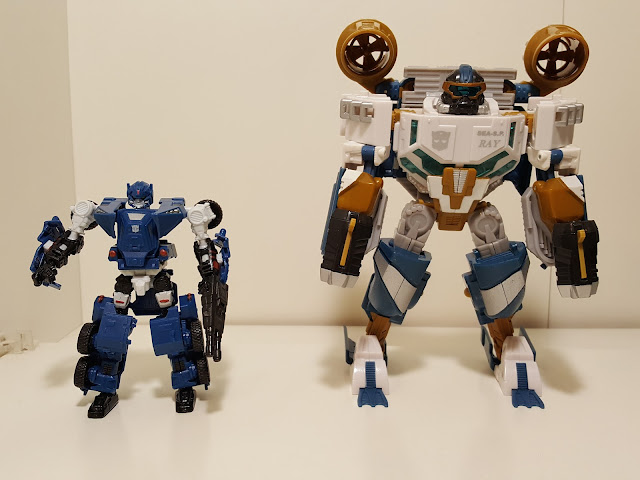 This is gonna be a slightly bigger than usual post. We have scout class Breacher and voyager class Sea Spray, both from Transformers Hunt For The Decepticons toyline. Reason I'm throwing them into one post is because they're designed to work with each other but we'll get to that later. As you can see, they are very different in design style so it's interesting that they are part of the same toyline. 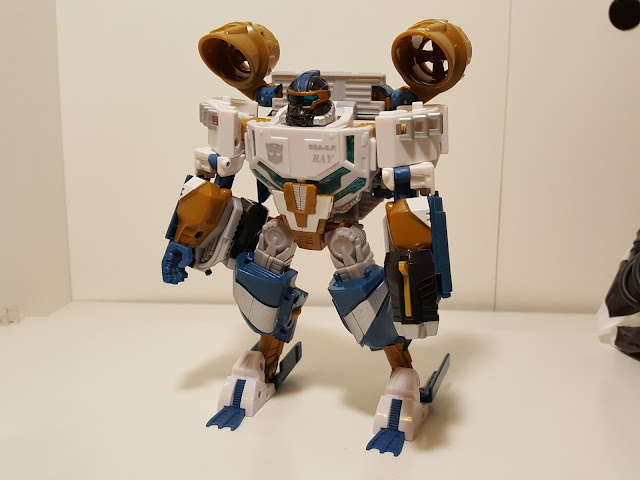 First one we'll get to is Sea Spray. Guy has a definite scuba diver motif going on with his robot mode complete with flippers and other scuba gear inspired elements. His guns shoot harpoon style missiles but I can't find them at the moment so you'll have to use your imagination. :P 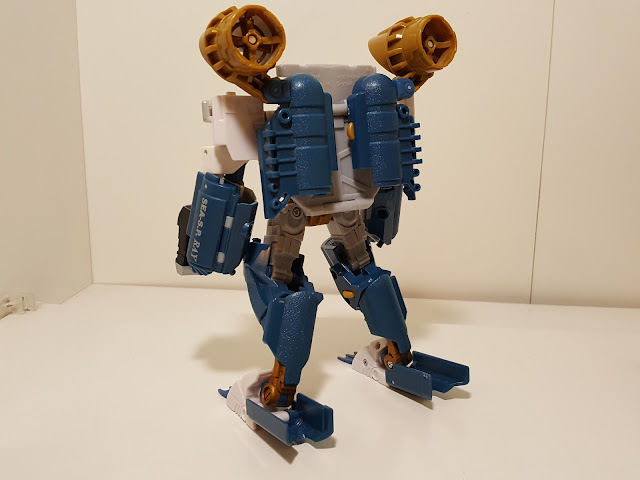 Back view. He's even got the air tank thing going on. 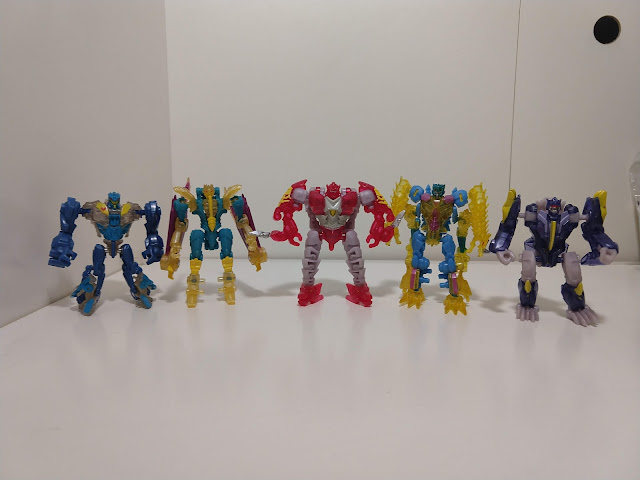 Roughly a week ago, I found the Transformers Prime Predacons Rising Abominus set under my bed. So I promptly opened it up and did a quick one. Apparently Abominus is the combined form of these 5 Predacons we see here. This is a legion class combiner btw so they're small. We'll go over them later. 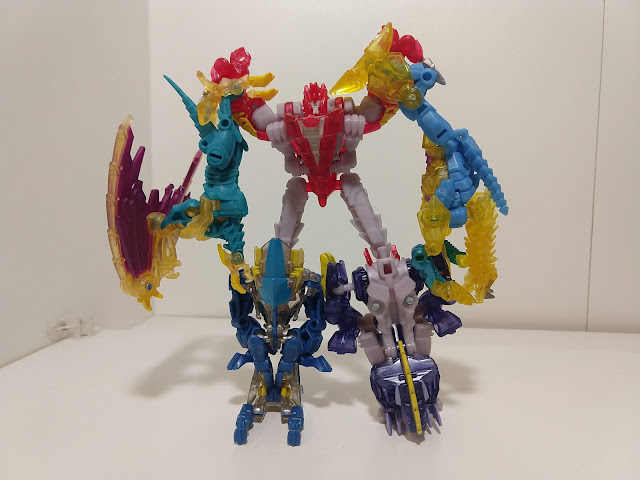 I'm gonna start right away with the big guy himself. Abominus has trouble standing straight due to the way his legs are. They get in each other's way and so there's no way for Abominus to look good on the shelf. Frankly he's just a bonus mode. 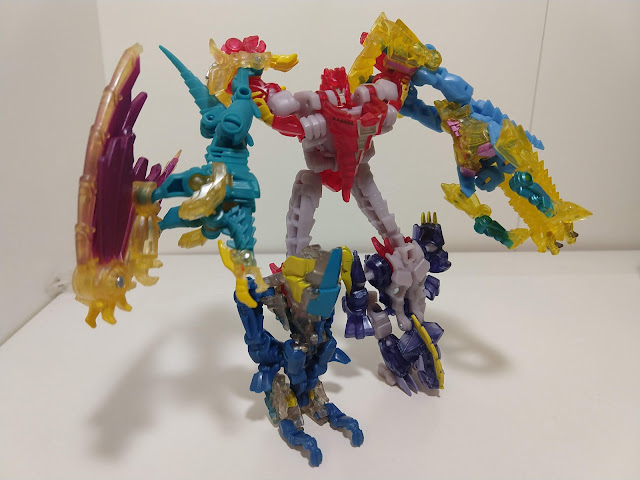 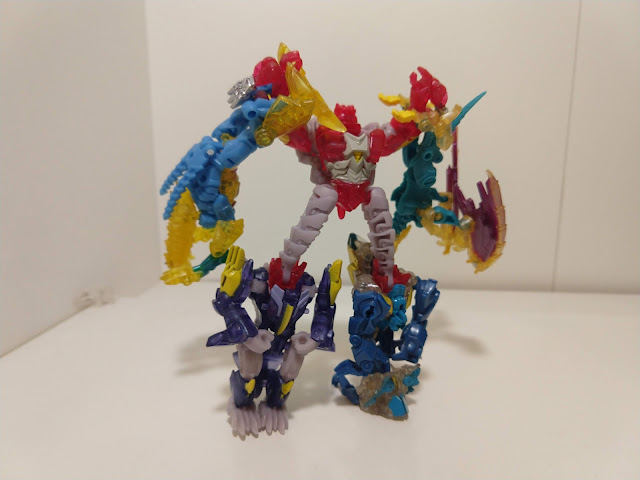 And a look at his back side. However you look at him, he looks like a mess. No proper arms and legs. 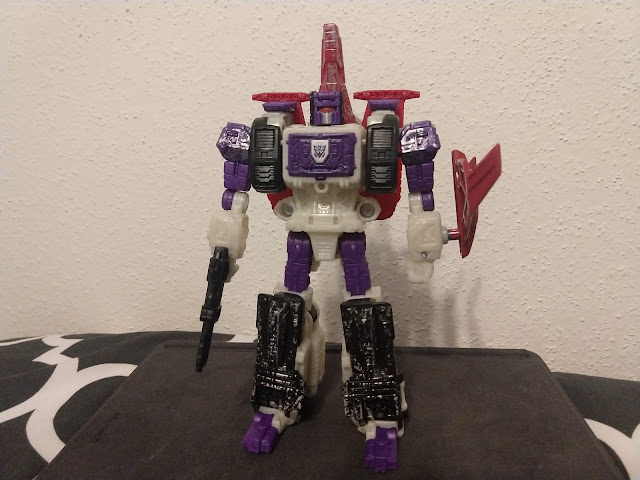 Voyager class Apeface. This guy is a Titan Master Triplechanger. Yup, not only does he have 2 alt-modes but his head also turns into a tiny robot as well as the core of the head for one of his alt-modes. 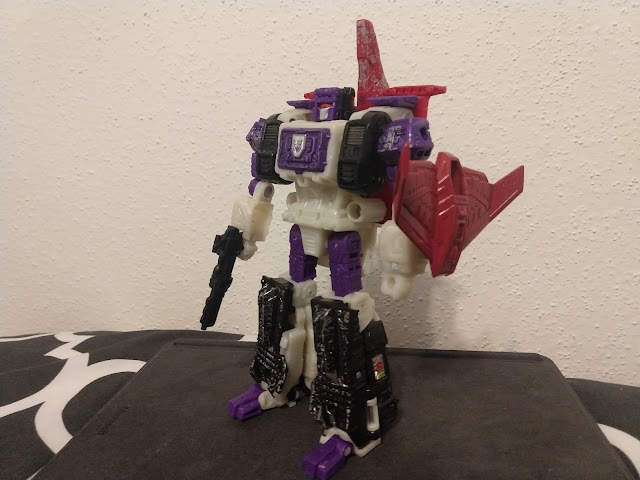 Like Springer, this guy was also a pain for me to figure out. His overall transformation is easier to remember than Springer but there are certain parts where you have to know where to apply force and where to work things in. 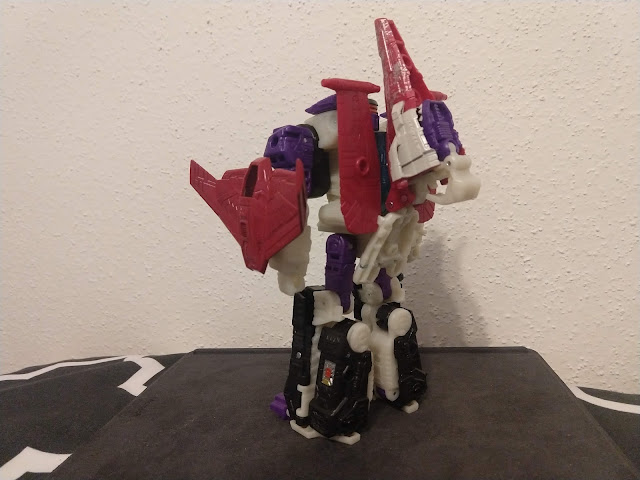 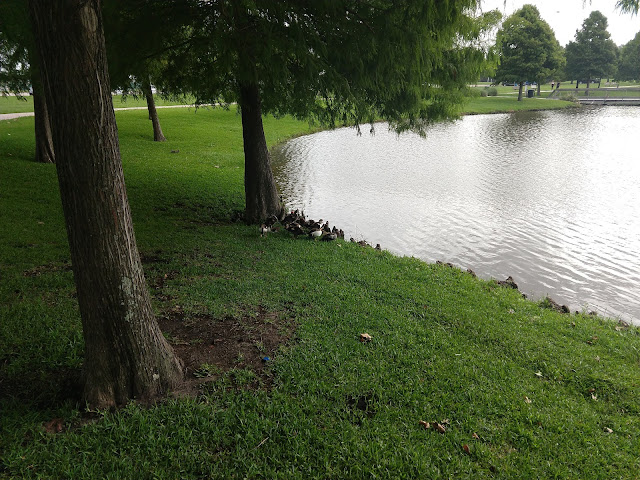 So anyone who follows me on Twitter should know I got COVID-19. I'm at the end of my 4th week and I'd say I'm 80-90% recovered. Probably be another week or 2 before I'm fully out of it. I suspect I got covid from my mother, who I currently live with (just so there's no misunderstanding, I'm the one supporting her, not the other way around :P), but that's a conjecture at best and there's no way to be sure how I got it. Fortunately, it seems my mother is one of those asymptomatic people who don't have any symptoms despite having the disease. My own symptoms, while fairly severe at the beginning, don't involve the usual symptoms like fever, difficulty breathing, and severe coughing. Mine involve hallucinations, headache/nausea, diarrhea, loss of appetite, partial loss of my taste receptors, sore joints, loss of energy/stamina, dry mouth, and just a occasional mild cough. My symptoms started with severe diarrhea and initially me and my doctor though it was some stomach virus/flu. But a week later, I started suffering severe headache and hallucinations as well so my doctor sent me to an ER where I was diagnosed with covid. Probably the most disconcerting thing for me was that everything started tasting weird and there was an ever-present smell that I had dubbed "the covid smell". Right now, my remaining symptoms are the occasional cough and taste. My taste has mostly recovered but up to a week ago, combination pizza still tasted somewhat off to me. I plan to have another one this weekend and if I can enjoy the combination pizza this time, that will mean my taste pretty much fully recovered.

Me having covid meant that I got kicked out of work. Fortunately, it's government related so I'm unlikely to be fired from it but it will take a while before I'm re-instated. This also means I get a lot of free time in the meantime so I've been using it to go through my room and start weeding out stuff I no longer want and stuff I've yet to open. This is reflected in my recent blog activity being much busier than it's been in a while now and likely will continue until I'm working again. 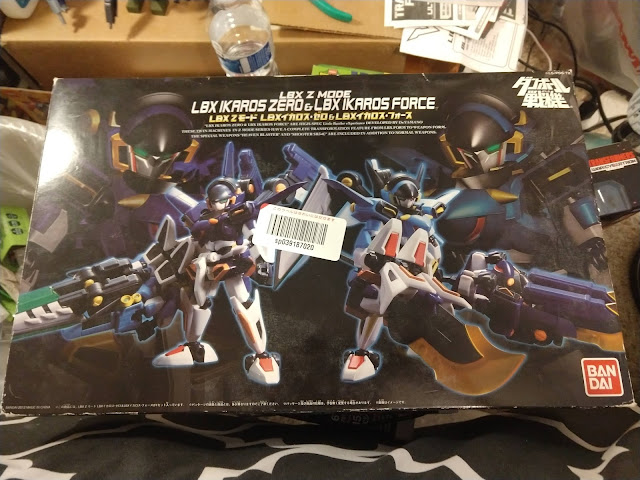 One of the things my recent activities have made me realize is that I really do need to make my posts immediately after taking my pictures and that I need to take my pics as I go through my unopened stuff. One of the things I recently opened is LBX Z-mode Ikaros Force and Zero. Those interested can check out peaugh's review below. 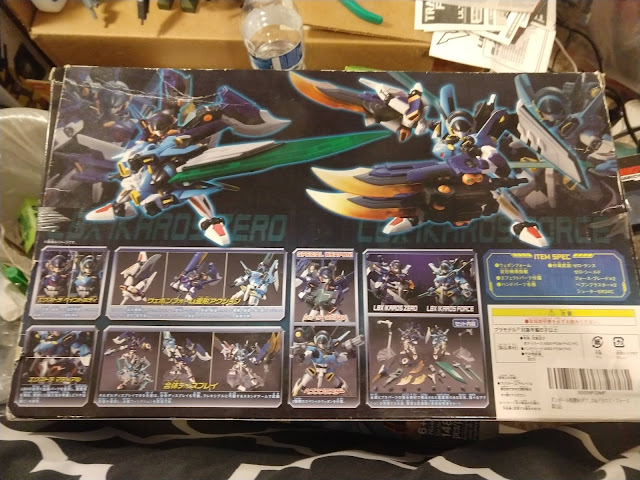 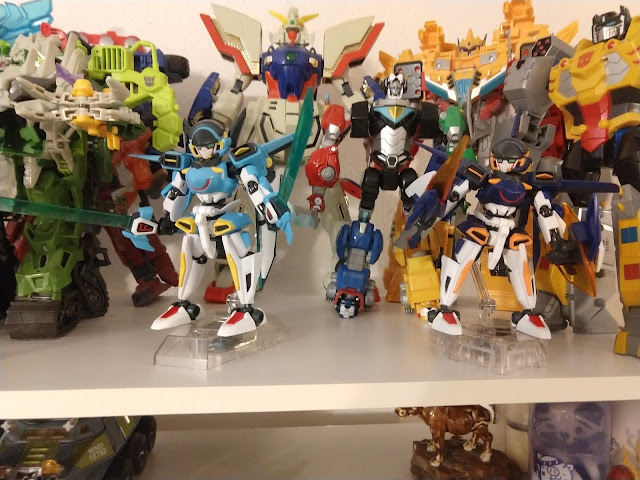 Frankly, I'm only interested in Ikaros Force's weapon mode because that one is a huge ass sword compared to Zero which is a couple of much shorter, less impressive curved blades. If I get around to doing it, I'll post another picture but this is pretty much it for now. 😑 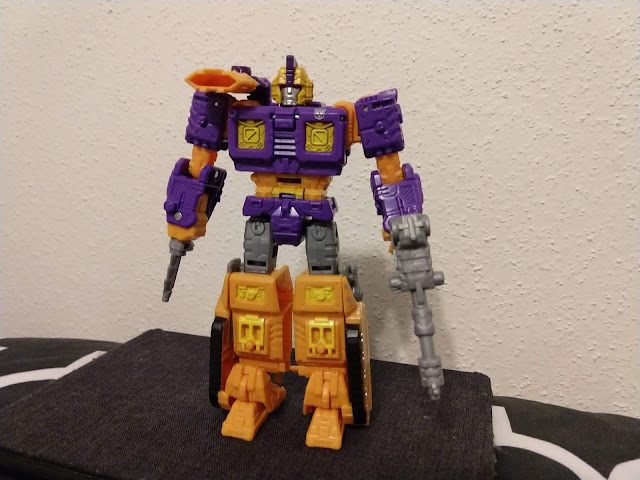 So here we got another tank bot, Impactor. 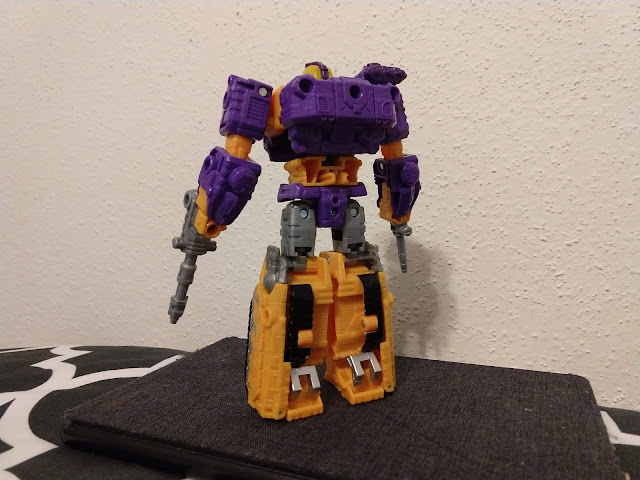 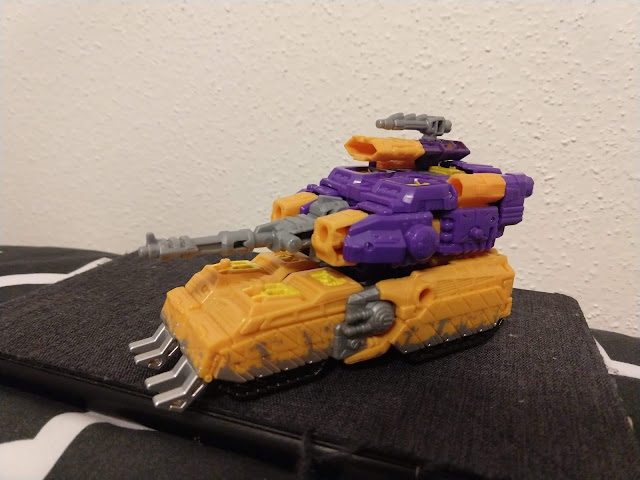 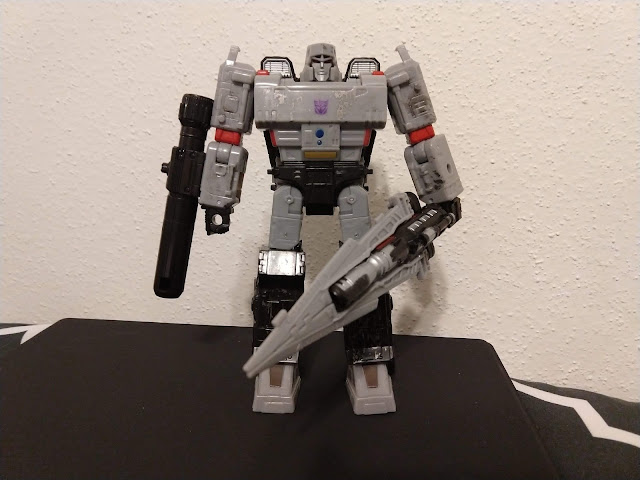 So I recently opened up Siege Megatron, the first version before they had all those repaints. He's a voyager class so not that big. 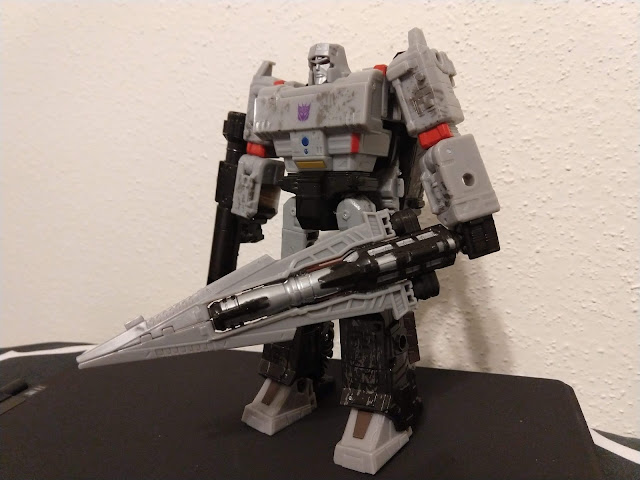 In addition to his arm cannon, he has this huge sword/cannon thing. 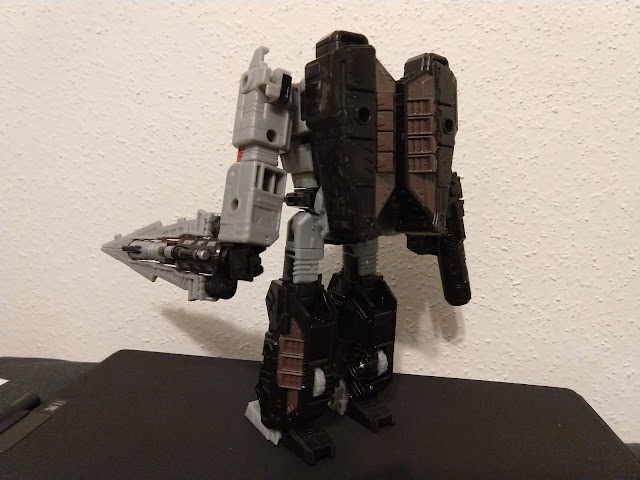 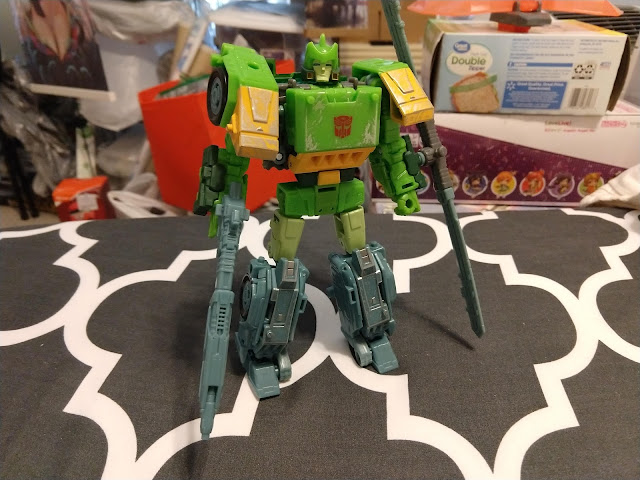 This guy was a huge pain to figure out how to transform. Transformers instructions are notoriously useless when it comes to explaining more complex transformations and Springer really took the cake on this one. There were very specific positions that you have to move the parts in order for everything to fit together and I had to refer to online videos to figure out those finer details. 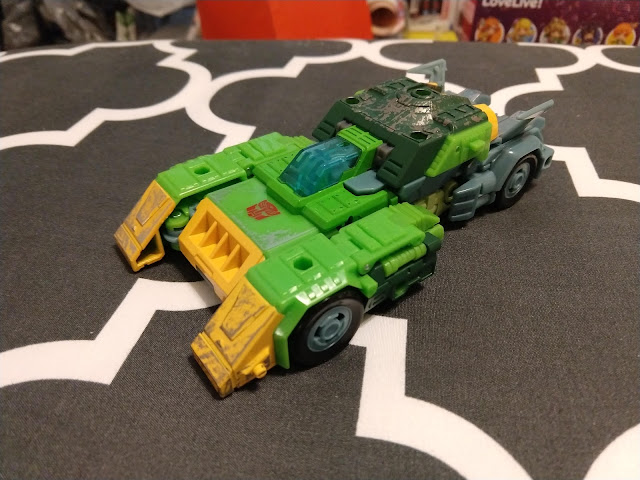 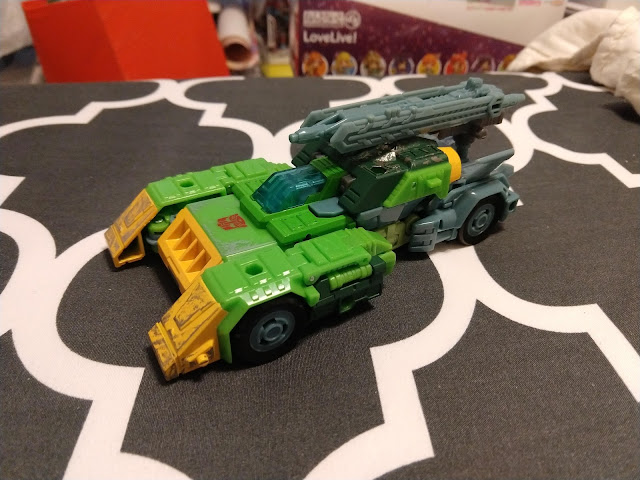 shizen22
Houston, TX, United States
I should take more pictures. I really should. :(

Ecchi-ism! (adults only!)
WTF Is This?!
What's this blog about (and who is this guy)?